What's invloved with a concert?

As per Eden Park Trust Board's (EPTB) application, these take 7 days to bring in and construct - and can be more for larger
stages, and 3 days to remove plus turf remediation.

Often for large acts with large complex stages, they travel with multiple stages, which leapfrog venues.
These can be in 30-40 40ft containers, and arrive 1-3 weeks before the concert. These are then built and await the arrival
of the production equipment - being sound; lighting; video and musical equipment.

The production gear has come directly from the previous concert, usually for Auckland from overseas, but can be trucked
from other venues around New Zealand. For Elton John, the 25 trucks traveled from Napier, and only arrived at 3am.
It will always be on a tight schedule - it must be loaded in a set production order, and is a complex process requiring on site
trucks, and movement of containers and trucks to the build sites. This usually happens overnight - with hundreds of staff
and dozens of truck/container movements overnight. It can be a noisy process, and involves multiple movements on and
off site, with associated parking and queuing of trucks.

The reverse process is then done at the end of the concert and again runs overnight - often until after 3-5am. This is a
crucial process, as the production equipment will be on a tight timetable to allow the next concert to happen. Therefore, it
will run over night no matter what - there will be millions of dollars at stake if schedules aren't met.

To give some further scale:

Taylor Swift had 36 containers for the stage on site beforehand. There were 58 trucks for production equipment arriving
during the day before, and into the early hours of the concert day.

Packout commenced straight after the concert through until 5.30am, trucks stacked in the ground and surrounding streets.

Queen and Elton John each had 25-32 truck/containers onto the site, with the Elton John trucks not arriving until 3am.
With the cancelled shows pack out was much easier tha scheduled.

We can see the size and complexity of some stages

This is the "std" large stage under construction at Mt Smart for Justin Bieber:

This stage has the Stage speaker arrays at 22m, and below we can see the start of the construction of one of the down
ground delay/relay towers. And some turf protection down - used after for the Adel concert (2017):


And later that night the stage nearing completion but no production/speakers /videos etc in yet: 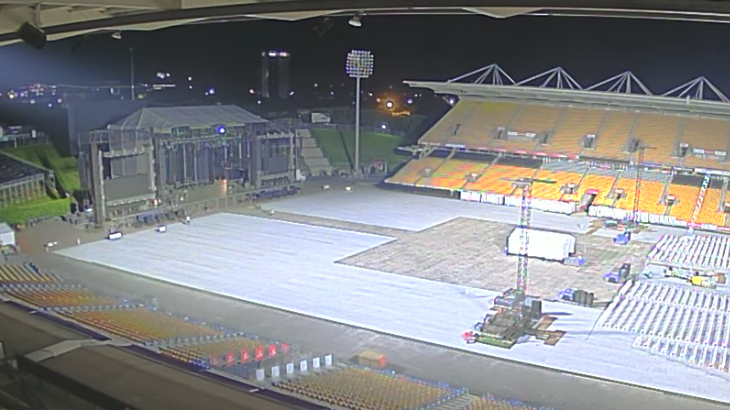 And the following night - production loaded in, and light testing underway: 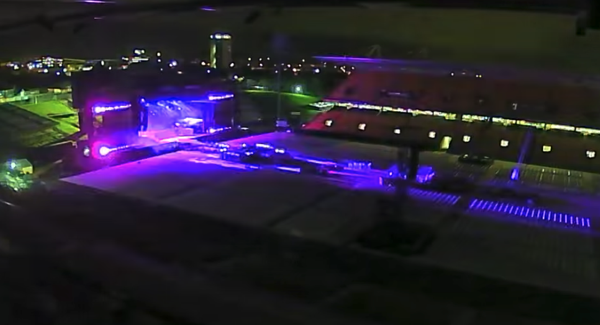 Then overnight after concert production trucked out, and stage pack out over next 2 days.
While towards the end the Adele stage started to be constructed. 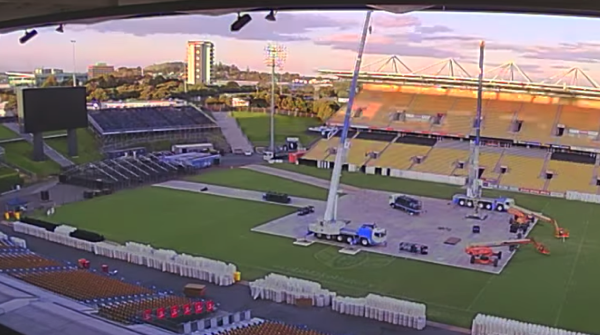 This took several days and nights to construct.
Adele in 2017 at Mt Smart had a very large and complex stage that 2 + days to take down - including over-night. 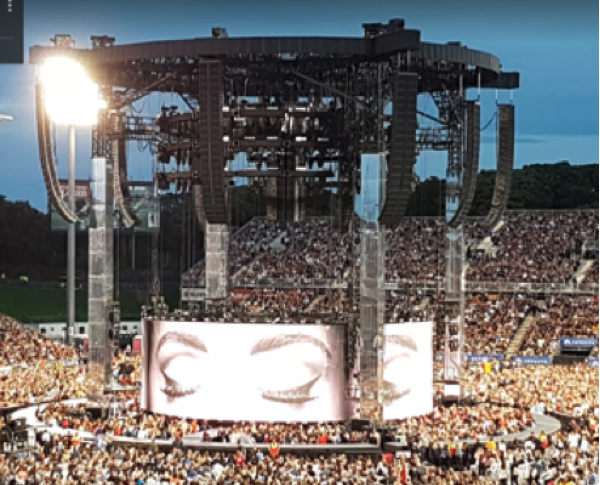 At the end of the concert, production pack out started - with a large number of truck and container movements: 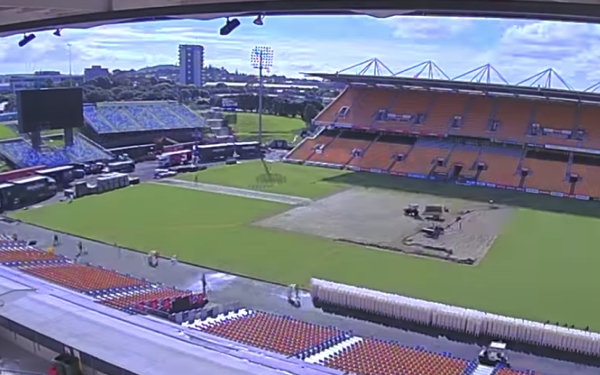 And for U2 this year we can see trucks on field for the production pack in (4 in this photo):
EPTB propose to be able to do this ie rear unload/load 40ft containers from under the south stand, and to move through 2
tunnels onto the field?.. 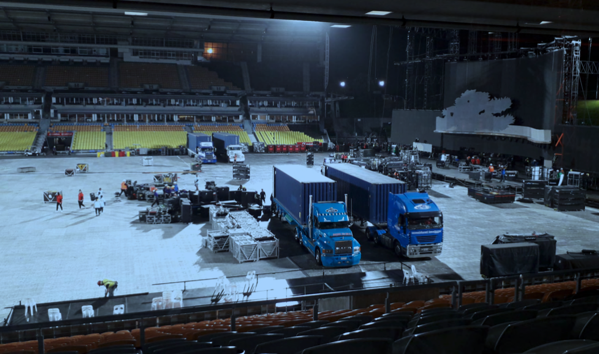