- Western Australian guidelines say that between 65-75dBA, there will be "a considerable level of complaints"

- Complaints often relate to the bass frequency, which can travel up to 2km

- Bass sound will also pass through buildings, people and pets

- Sound outside the ground is distorted eg echoes, different frequency speeds, and is not like getting a free concert!

- The WHO recommends 30dBA in bedrooms for reasonable sleep. The Unitary Plan residential limits after 10pm
(6pm Sunday) are 40dBA at your property boundary

- EPTB's own noise models show they are right up to 75dBA limit, houses

- In our view the Noise models understate effects

- They have top of speaker arrays at just 12m whereas standard large act's stages are 22-26m high - spreading sound out of the
ground more.

- They fail to model a normal speaker setup eg at the stage edges and pointing to both the field and up into the stands
ie towards Walters Rd and Reimers Ave.

- They also don't model normal delay/relay towers to get good noise quality and volumes up to all seats.

- The overnight pack in and pack out noises have also been inadequately modelled, including the South stand carpark not
having overnight truck noise analysis.

What we are learning is that concert noise is a complex issue. This will be expanded on by experts during the hearing.

However, as background we see several key features.

Firstly the dBA is complex but is the "power" (pressure level) of the noise. This is the level that people relate to other objects eg 75dBA
is like being in a room with a vacuum cleaner.

But the level is a logarithmic scale - a 10dBA increase is twice the perceived level of noise. So 65dBA is twice the Eden Park current
music/PA level, and the proposed 75dBA is four times louder.

The carry or hearing distance - this will have a lower noise level/energy (dBA) further from the ground, but can travel over a long
distance, it can still be heard, and be aggravating and disturb normal activities. This is where we can sometimes hear Mt Smart (7 km
away) or Western springs (2.5 km). However, from Eden Park to the Mt Eden Village is only 1.7 km).

Sound travels greater distances at night and is influenced by atmospheric conditions, and both the level ie dBA and general sound can be very affected by wind.

The next aspect are the different frequencies - again a low frequency bass, can travel twice as far as the higher frequencies, and goes
through buildings, people, pets etc - the window vibration we get form some car speaker systems as they drive briefly past is a good
example of that.

The sound is also bent or reflected around objects, and also bass frequency can go through objects, so while the band's sound engineers
deal with the complexities inside the ground, with their configurations and testing, including delayed relay towers to get good noise
levels to remote upper/distant seating, outside the ground these reflections/echoes will impact on what is heard - ie the distorted sound,
it won't be like getting a free concert!

When people talk about the houses bordering Western Springs setting up stands and getting a free concert, they of course are within
line of sight, and essentially getting the same sound as patrons.

Apart from the music, there is also crowd noise - which is uncontrolled and can exceed the music levels of 75dBA, by up to 10dBA ie twice as loud.

A duration of 4-6hrs + 3 hrs for testing and sound checks.

In our view these models have been worked backwards from what was required to meet a standard 75dBA concert noise.

We believe they do not represent a real-world concert situation.

Council also seemed to have had concerns and asked for additional modelling with speakers at 27m heights and not the 12m used.

We can see that even within the ground front of the south stand at only 85dBA, and rear of North Stand (east end) down to 75dBA.
It's hard to see a promoter or artist being happy with that large variation for patrons. And why in practice there would be delay/relay
towers 2/3 down the ground.

These speaker systems at standard concerts are designed to get a uniform high-quality sound and good noise levels to every seat in the
ground. Otherwise promoters risk complaints and potential refunds.

We can see in EPTB's modelling - which is based on 2 low 12m speaker arrays, close to the centre - the two small purple dots in front
of the west stand, then with the 105dBA used here, based on a 30m mixing desk. Both those potentially understate the noise levels -
obviously the speaker heights we cover above, but also most sound mixing desks are 35-45m away.

We can see that even within the ground front of the south stand at only 85dBA, and rear of North Stand (east end) down to 75dBA.
It's hard to see a promoter or artist being happy with that large variation for patrons. And why in practice there would be
delay/relay towers 2/3 down the ground. 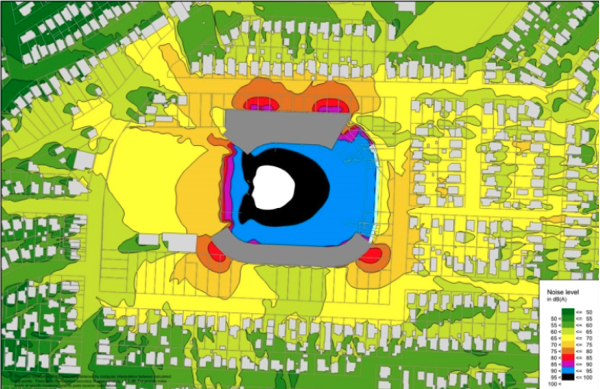 When looking at EPTB's noise models the range of levels within the ground - from 75dBA to 100dBA, just don't look realistic
without the additional delay/relay tower hung speakers.

This is the recent U2 Mt Smart concert set up related to Eden Park:

That raises a lot of issue for us in that the modelling is so distant from reality.

We can see here the U2 heights of Speaker arrays, and also directions ie pointing directly into the stands: 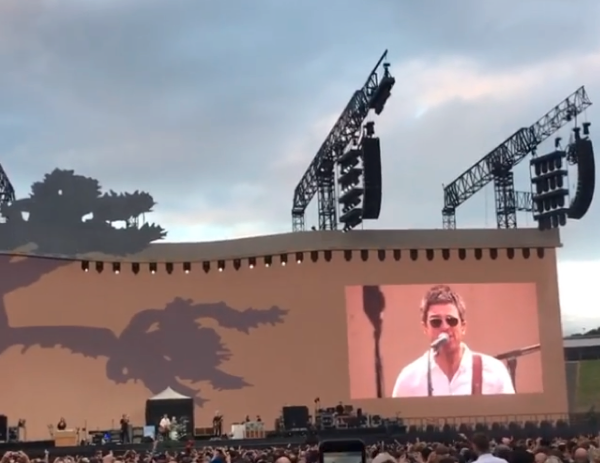 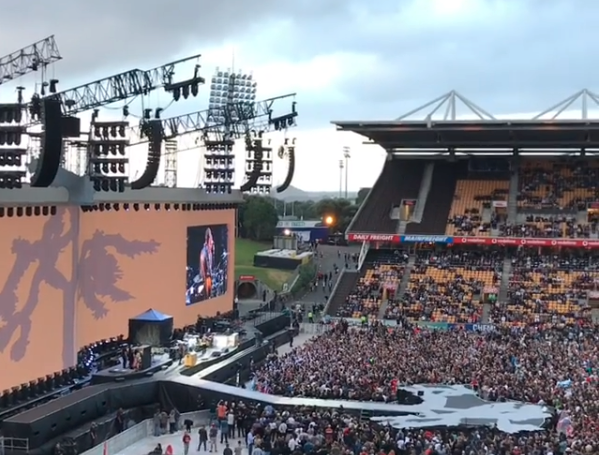 And a clearer photo of the left 2 delay/relay towers - 4 in total for U2: 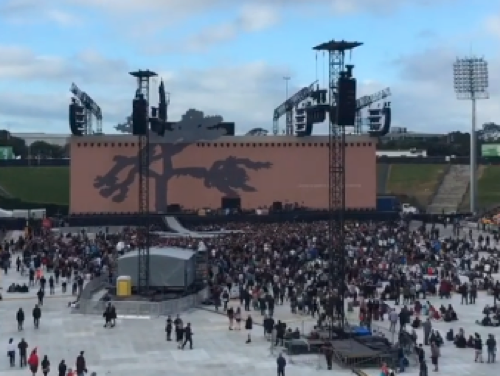 Elton John had a local stage with the 22m high speakers (4 arrays): 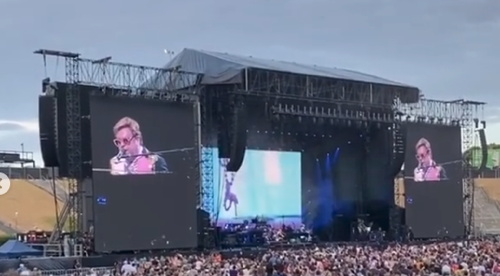 Adverse effects outside the ground:

Even these questionable models show houses getting between 70-75dBA - ie right up to the proposed limit - this in practice
means there is no margin for error in meeting the proposed limit. Errors in either the model not matching the real-world set up,
or in the actual control of the levels by the bands mixing desk, on the night.

The first point to note is that all models show lowest level as below 50dBA - and shown as green to denote ok in our minds.
However, that is not the relevant 40dBA nighttime (post 10pm) residential limit that has to be met. The models need to show the
properties who will have greater than 40dBA.

While that is the Unitary Plan night time rule, the 40dBA is also relevant when assessing effects on those sleeping before 10pm
eg children, shift workers, the ill.

As EPTB want mid-week daytime concerts, which could include music festivals such as the Big Day Out. For a proper noise
assessment the noise levels also have to be assessed against guidelines for Schools and Daycares centres. Noting that Kowhai
School classrooms are only 300m from speakers. The application ignores this area.

Acoustics in a school are extremely important for learning. It would appear that for learning purposes, classrooms need 35-45dBA.
Also outdoor activities may be impacted as well.

The duration could be 3hrs of sound testing and 4hrs of concert noise.

The wider area EPTB analysis shows large areas >55 dBA (in purple), but doesn't specify each dBA band above 55dBA.
However we can see that both Kowhai Intermediate and Mt Eden Normal would exceed 55dBA (with the std caveat on modelling
understatement risk) 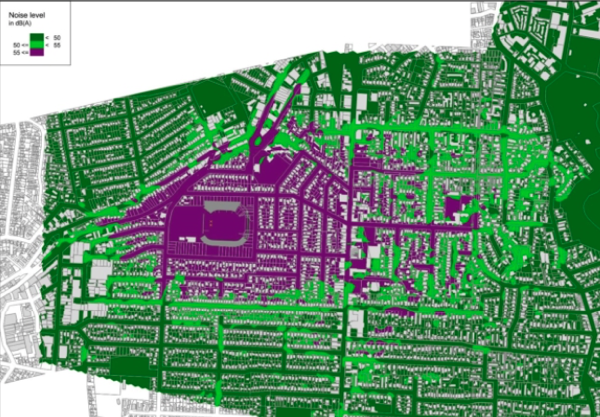 In the re-done centre stage (at only 100dBA) model requested by Council for a 27m speaker array height we see below that
Kowhai receives between 65-75dBA. 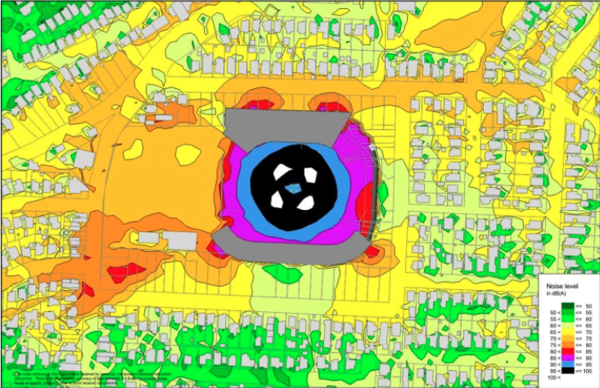 Per noise models above, we see at the 27m speaker height Kingsland receives 70-75dBA at their rear windows and walls,
and 65-75dBA on the other side of New North Rd. Again noting the risk of levels being higher.

In relation to Mt Smart the Kingsland New North Rd section is the same as Church St, right beside Mt Smart - but not protected
by the Mt Smart crater.

The wider area map shows businesses on Dominion having > 55dBA, but again actual level not specified.

It must be noted that again the duration could be 3hr for sound testing and 4hr (Sat-6hrs) for a concert.
And also that these could be daytime -including mid-week, and mid-week night time from 6.30pm.

While there are Health and Safety issues, per below, each businesses will have to assess how the noise levels will impact staff and customer interactions.

Being in close proximity to full concert noise will also bring health and safety requirements into play for businesses and other
employers within the area, including businesses run from home. Each situation will be different eg a restaurant with seating outside,
whether able to close windows and doors during summer etc. The duration of the noise level received, along with hearing protection
are crucial issues to address in their risk assessement.

This is significantly different than a capacity rugby game. There may be 17,000 people on field, and with both field and stands are all
facing and singing/screaming direction to the stage end ie a focused direction out of the ground at a low point in the stadium seating.

Experience at SunCorp Stadium is that crowd noise can be between 5-10dBA over the limits within the ground.

"It was noted during measurements inside the stadium that the crowd "screaming" exceeded the concert noise level by up to 10 dB(A)
for sustained periods of time during all measurement periods - at least 5 dB(A) higher than maximum crowd noise contributions
measured at previous concerts".

However, EPTB have only assessed crowd noise based on a normal rugby test, and not on the specifics of a concert.